Home News Earth Day, I wish it were a true National Holiday

Earth Day, I wish it were a true National Holiday 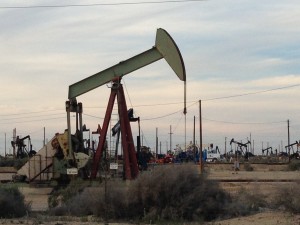 I wish it were a true National Holiday, but still it’s on my calendar. While touring in CA I came across the oil fields outside of Bakersfield… There were hundreds of pumps literally neck to neck as far as I could see burying their heads over and over in the desert floor. Some were old and rusted, clearly personalized with various signs, graffiti, initials, etc and one was brightly painted bubblegum pink.

Last week I was going through some old photographs I took while traveling in Borneo. Even in 1989, the rivers were filthy while piles and piles of humongous logs floated alongside waiting to be shipped downstream along with the river muck.

In Denver where I live, a thick layer of brown hangs over the city when the wind and snow don’t blow it away. Some 34 trains with 40-50 cars full to the brim with coal, rumble past our windows day and night. I met the PR person from Exxon on a flight and asked her about the black stuff… “What happens when all the coal is gone?” She said: “Well, it won’t be a problem in your or my lifetime, so I don’t worry about it.” A PR person?  Hmmmmm…

Scuba diving is one of my most favorite hobbies. I travel long distances to see what lies beneath our oceans. Vanuatu was recently destroyed by a cyclone. It’s in the middle of the Pacific Ocean and the New Hebrides Trench is one of the deepest places on Earth. But when I was diving close to the Island, only about 60 feet down, I found a large formation of what appeared to be “bones” stacked near the bottom of a coral reef. When I surfaced with a small shred in tact, it turned out to be plastic.

These days, I see our beautiful planet Gaia/Earth as a wounded giant… its precious life forces being damaged beyond repair. Please on this Earth Day, commit to do ONE small gesture below that will help heal the wounds:

Leave the car alone and bike, bus, walk or carpool, to work

Turn off the television and other devices

Drink from stainless steel or glass containers instead of plastic bottles

Use biodegradable soaps and cleansers

Hang clothes in sun to dry them

Carry shopping bags with you

Children’s Music Network has a wealth of wonderful songs with environmental slants. http://www.cmnonline.org   One of my favorite songs in celebration of Earth is

‪✔ Israel Kamakawiwo’ole – Over The Rainbow & What A Wonderful World –