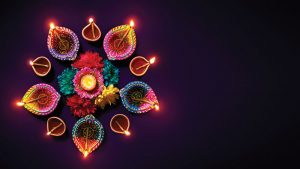 The History of Diwali:

Diwali Deepawali or Divali, (depending on what part of India you are from), is a true festival of lights, and the biggest and one of the most celebrated holidays in India. Diwali’s name is derived from the rows and rows of clay lamps, which symbolize the inner light—the light that protects and people from spiritual darkness. (Avali means “rows” and deepa means “lamps”). It is a time when light and joy triumph over darkness and evil. There are a few different stories about its origin, and all are based in history and/or mythology. Diwali is celebrated by all faiths found in India: Hindus, Jains, Buddhists, and Sikhs. This Hindu epic, is the most well-known: 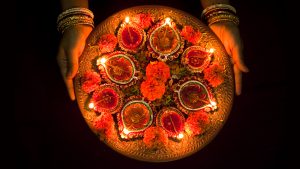 The Story of Ramayana:

Thousands of years ago, a King named Dasharatha ruled over the kingdom of Ayodhya.  He had two wives and seven sons. Prince Rama, the eldest son, had a beautiful and adoring wife, named Sita.  One of King Dasharatha’s wives was jealous of Rama so demanded that the King send Rama, his wife Sita and Rama’s brother Lakshmana to be exhiled in a forest for fourteen years. Since the King had promised both wives he would give them anything they asked, he had no choice but to comply with the jealous wife’s wish. Soon the three of them were banished from Ayodhya. In the forest, there were several ferocious demons and one named Ravana, was a demon king who had fallen in love with Sita.  One day, when Rama and Lakshamana were out hunting, Ravana abducted Sita and hid her away on his own island kingdom called Lanka. When Rama and Lakshamana returned and discovered that Sita was missing, Rama was devastated. He immediately called upon all the monkeys, bears and men of the forest to help in the search. Thanks to all their help and to Hanuman, King of the monkeys, (who could also fly and was incredibaly strong), Rama was able to defeat and kill Ravana and rescue Sita, his beloved wife.  Soon after that, the 14 years of exhile ended, so the brave threesome returned to Ayodhya. The people were so happy to hear of their prince’s homecoming, they celebrated Rama’s return by covering the entire kingdom with light.  Everyone lit up their houses, windows and doors with rows and rows of earthen lamps (diyas). They lit firecrackers that exploded and brightened the night sky and decorated every corner of their city. It is a joyous celebration for everyone.  http://www.kidsgen.com/events/diwali/history.htm

Diwali is celebrated over 5 days: 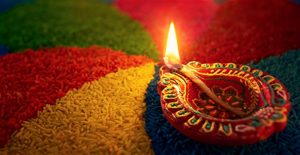 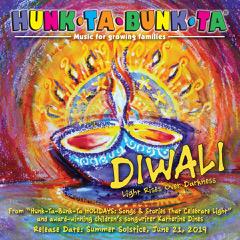